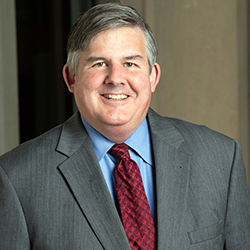 Charles Blanchard, who previously served as the General Counsel of the Air Force and the Army, works with clients in the contracting and national security communities, drawing upon his experience in government and private practice, providing unique insights into doing business with the federal government.

Prior to joining the firm, Mr. Blanchard served as General Counsel and Chief Ethics Officer for the US Air Force (2009-2013). In this role, he provided oversight and guidance for legal advice provided by more than 2,600 Air Force military and civilian lawyers worldwide. In addition, he served as General Counsel  at the US Department of the Army (1999-2001). Mr. Blanchard’s other government experience includes serving as Chief Counsel to the White House Office of National Drug Control Policy (1997-1999), and as a two-term member of the Arizona State Senate. In 2003, he served as Interim Homeland Security Director for former Arizona Governor Janet Napolitano. Mr. Blanchard was also formerly a partner in private practice where he focused on complex commercial litigation, antitrust, state constitutional law and election law.

Upon graduating from Harvard Law School, where he graduated first in his class and served as an Articles Editor for the Harvard Law Review, Mr. Blanchard served as a law clerk for DC Circuit Judge Harry Edwards (1985-1986) as well as US Supreme Court Justice Sandra Day O’Connor (1986-1987). Mr. Blanchard also holds a Master of Public Policy degree from Harvard’s John F. Kennedy School of Government.