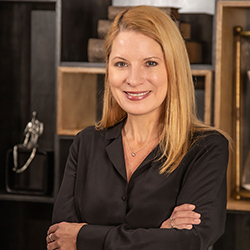 Michelle Kley is the Executive Vice President, General Counsel and Secretary of Virgin Galactic Holdings, Inc. Michelle is responsible for overseeing all legal affairs for Virgin Galactic Holdings and its subsidiaries, including corporate governance, securities law and NYSE compliance, M&A activity and strategic transactions. She also acts as Corporate Secretary and advises the board of directors.  She leads a team who manages the day to day legal and compliance matters of the operating subsidiaries.

Prior to joining Virgin Galactic, Michelle was the Senior Vice President, Chief Legal and Compliance Officer and Secretary of Maxar Technologies Inc., a space infrastructure and Earth intelligence company. Prior to joining Maxar, Michelle worked as a Corporate Associate for several law firms in San Francisco, including Wilson Sonsini Goodrich & Rosati P.C. and Morrison & Foerster LLP.

Michelle serves as the volunteer General Counsel for the Association of Space Explorers, a non-profit organization with a membership composed of people who have completed at least one Earth orbit in space. She is a member the International Institute of Space Law and is on the board of directors of its US affiliate, the US Center for Space Law. She previously served as a member of the National Oceanic and Atmospheric Administration’s (NOAA’s) Advisory Committee on Commercial Remote Sensing (ACCRES) and was the chair of the Remote Sensing Regulatory Reform Working Group.

Michelle graduated from University of California Berkeley Law School (Boalt Hall) with a J.D. degree and from Sonoma State University with a Bachelor of Arts degree in psychology. Michelle is admitted to practice in the State of California and District of Columbia.  She is based in our Los Angeles office.