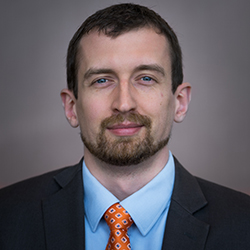 Tim Schnabel is the Executive Director of the Uniform Law Commission, which works to draft and promote enactment of uniform laws that are designed to solve problems common to all the states. He previously served as an attorney in the State Department’s Office of the Legal Adviser from 2008 through 2018. In that role, he served as the head of the U.S. delegation and lead negotiator for several multilateral treaties aimed at legal harmonization, including the Singapore Mediation Convention and the Mauritius Transparency Convention. He also led U.S. efforts in developing model laws and other multilateral instruments related to cross-border insolvency, secured transactions, arbitration, and financial markets law. Earlier in his tenure at the State Department, he advised policymakers on legal issues related to international trade, intellectual property, aviation, food assistance, and business and human rights. Prior to joining the State Department, Mr. Schnabel practiced law at WilmerHale and clerked for the Honorable Janice Rogers Brown on the U.S. Court of Appeals for the D.C. Circuit. He has also worked on a startup developing new technologies for alternative dispute resolution. Mr. Schnabel received his J.D. from Yale Law School and his B.A. and M.A. from Case Western Reserve University.