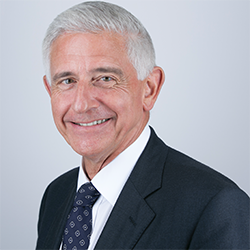 Wolf spent nearly 30 years in London, England, as European Legal Director and Assistant General Counsel to Northrop Grumman Corporation a global aerospace/security company. In that position he was responsible for its international legal affairs. Prior to that, he served 5 years as the Vice President – Legal Affairs for Litton Canada, after having spent several years in legal practice with a major Toronto Law Firm. He retired from Northrop Grumman in 2015 as its Assistant General Counsel and is now a member of Int. Arb Arbitrators and Mediators in London/Washington and the Managing Director of Global Resolvers a provider of dispute resolution services. Wolf has received law degrees from Canadian and European Universities and is qualified as a lawyer in both Canada and England.

Wolf is a certified CEDR mediator and an arbitration Fellow of the Chartered Institute of Arbitrators. He has mediated numerous private and public sector disputes and been active in international commercial and ISDS arbitrations. He sits on the mediation panels of CEDR, AIAC, WIPO, SCCA and the AAA/ICDR. In addition, he is a member of arbitration panels at AAA/ICDR, AIAC, LCIA and the SCCA. In this context, he sits on the AAA/ICDR AANS Panel which specialises in aerospace, security and defence related disputes. He has also been a keen proponent for the broader use of dispute boards by Industry and Government as a conflict avoidance tool and instrumental in bringing mediation to Investor/State disputes through work with the ECT, IMI, CEDR and ICSID.

Wolf was the first Chair of the International Mediation Institute (IMI), which has advocated international standards for mediators. He the former Chair of the CIArb Board of Management. He serves as a Director of the American Arbitration Association (AAA) and of CEDR in the UK. In addition, he has been widely involved in arbitration, mediation and conflict avoidance board training for the CIArb, AAA and CEDR. Mediation training has emphasised investor state, aerospace and technology as well as IP disputes. Training has been carried out in Europe, the UK and Asia, including for ICSID, the ECT and the the Hong Kong Department of Justice. Wolf has also written articles on the use of mediation by in house counsel and mediation in investor state disputes. Wolf has spoken extensively on conflict management and is the co-author of a book on conflict avoidance techniques (Volcano Insurance). He is also the co-founder of the International Dispute Registry (IDR), which was founded to assist States in formulating and implementing effective ADR policies and structures to assist with global trade.